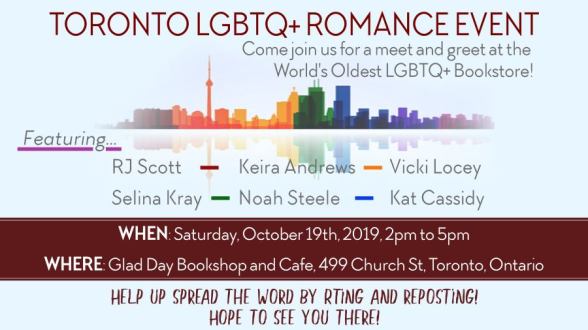 Announcing the first ever LGBTQ+ romance event in Canada! Some fellow authors and I are having a signing/meet-and-greet in October in Toronto at Glad Day Bookshop and would love to see you there! Come for the great books, stay for the tasty beverages, snacks, prizes, and great conversation with authors like RJ Scott, Keira Andrews, Vicki Locey, Noah Steele, and Kat Cassidy

Details below! Check out our event page on Facebook for all the latest info!

Very excited to see you there!

The man who entered the four-storey-spanning glass elevator looked like any other: corduroys, boots, trench, scarf. Male pattern baldness. But as the doors shut and the car began its ascent, it was like being locked in a peep show booth, except he was the star of the show, his own private dancer. He dropped his pants, loosed his privates, spread his arms wide, and started to… pee. And dance. And pee. And dance. On the glass walls, for everyone to see.

The employees at Chapters Centre-Ville Montreal, of which I was one for almost four years, came to know him, not surprisingly, as the Dancing Pee Guy. He was one of our less savory regulars, and the bane of J. on the second floor’s existence, for obvious reasons. Involving a bucket, a mop, and a whole bottle of Windex.

My station was the information desk, a sort of mini-fort beside the cash. It was, to my mind, the best of both worlds. Proximity to the cash significantly reduced boredom, which happened when you were alone on one of the upper floors with little to do. The hub of the store, it gave you the chance to interact with customers, managers, guests, and fellow employees from all the other departments. For every pithy interaction with someone who couldn’t understand why a book with the word ‘hospital’ in the title might be hard to search for, there were the hours spent with serious book-lovers, discussing philosophy, art, literature, cinema.

Our store was special. For one, it looked like an old-fashioned library, all faux mahogany stacks and attractive but uncomfortable chairs. Little nooks that became your oasis on a snowy day. Unlike the Indigo down the street, it was a haven for artists who needed a day job that didn’t entirely stifle their souls and grad students who didn’t want to just punch a clock while they completed their degrees. We were, as a group, way too smart of their own good. I spent many a break involved in a passionate debate in the staff room, many a weekend going to someone’s poetry reading, concert, or exhibition. These people knew their books—if you knew what you wanted, they would give their all to find it for you, even if that meant a special order or calling another store. Of course there were nights where we dicked around—what’s the point of having a retail job if you can’t occasionally dick around?—but we were devoted, to the books if not always to the company.

We resisted the top brass’ desire to cut down on books and amp up the home decor section for as long as possible. When we found out that the web site was selling a book by a local psychologist that explained how to de-program gays, the staff—a good 50% of which were LGBTQ—collectively wrote a letter of complaint to the CEO (Chapters-Indigo famously has a policy against carrying hate literature). Ditto decorating the entire first floor in rainbow balloons for pride.

It wasn’t all sunshine and roses, of course. There were break-ins and broken hearts. You grew to love some books so much you’d pimp them to every customer (Shadow of the Wind), but despise others simply because of the amount of copies they sold. I used to joke that if I got paid a nickel for every Da Vinci Code I sold, I could have retired at thirty. The night of one of the Harry Potter launches, when everyone was celebrating, I accidentally miscalculated the change required from the bank to the tune of losing us $200, and spent a good hour crying in the office, terrified of being fired (spoiler: I wasn’t).

And now comes the news that my store, our beloved store, the one I love to revisit a few times a year even though I haven’t worked there for almost a decade, is closing. In its place? A Victoria’s Secret. If that doesn’t perfectly exemplify what’s wrong with our contemporary world, I don’t know what.

I visited last night, for the last time. It closes tomorrow. The cliche was true, it was a shell of its former self. All the upper floors and the basement were closed off. The Starbucks had already moved out. The last of the stock was collected on the first floor, where the bestsellers and recent releases used to be, divided into sections marked by handwritten signs taped onto the edges of tables, the sides of shelves. The two front doors were flung wide open, as if they didn’t even mind if you stole.

Though I was sad, I couldn’t help but smile. So much of the person I am was formed between those walls. There, I got my first taste of real responsibility, real challenge, real camaraderie among co-workers. I don’t think I’ll ever work anywhere where I like the people so much ever again. Chapters gave me one of my best friends, a lifetime of dinner party repartee, the courage to dip my toe into the publishing waters, and, with any luck, fodder for at least one madcap novel/television series.

I checked the elevator, but the Dancing Pee Guy wasn’t there. His legend, like the store itself, is now a thing of memory.