When you think about a book/film/show that you love, does your mind automatically go to one of the twists of the plot? The setting? The costumes? The descriptions? A line of dialogue? Maybe. But I guarantee the number-one thing your brain clicks to is your favorite character.

Fiction lives or dies by the quality of its characters. If they are well-realized, they win our hearts forever. If they are deeply flawed, we sometimes love them even more. Some are downright dastardly, but that doesn’t matter if they keep us at the edge of our seats. In fiction, the cardinal sin is being boring. Villainy we can endure. It’s mediocrity that disappoints.

Being a pop culture junkie, I thought about doing a typical ‘best of’ list for the blog. I love reading them. I love shouting at their authors even more (from the privacy of my couch). I like the orderliness of them, the time-capsule aspect. But as I was walking my dog this morning, pondering what books or shows would make my list, I kept coming back to the characters that made these books and shows so memorable. Because it always comes back to them.

So, without further ado and in no particular order, here are my 10 most memorable characters in books, TV, and film in 2014.

-Stephen Day, the Charm of Magpies series by KJ Charles. Such a wealth of compassion, bravery, and determination should always come in such an adorably small ginger package.

-David Lauriston, the Enlightenment trilogy by Joanna Chambers. You will notice that I tend to favor the harried, beleaguered, crusader-for-justice type (see above, and below). This lovely gentleman is no exception.

-Percival Endicott Whyborne, the Whyborne & Griffin books by Jordan L. Hawk. It came down to a photo finish between the two protagonists of this series because I love them both so much. I resisted it being Whyborne because I see so much of myself in him, especially in the first two books of the series. So many of the trials in his life are trials in mine, and there is a definite catharsis in watching him overcome them in ways I can’t (or haven’t been able to). But in the end, that is the exact reason why I love him: he teaches me something about myself that is hard to accept. And so Whyborne beats Griffin by a nose.

-Nicholas Goring, the Butterfly Hunters series by Julie Bozza. The man is a jewel that cuts so deep. His outlook on life is one we should all emulate. I never felt happier this year than reading about the world through his eyes.

-Aaron Seavers, Fever Pitch by Heidi Cullinan. How could I not love a character trying to come to grips with both the music inside him and his attraction to men? This is also likely the result of my current Grant Gustin obsession (see: the TV section).

-Rabbit Hatmaker, Bellweather Rhapsody by Kate Racculia. Another musical protégé confused about his sexuality. It’s getting to be a theme.

-Antoinette Conway, The Secret Place by Tana French. Not a lot of women on this list, alas, probably due to the fact that I mostly read M/M. But Conway is a blunt-force trauma of a woman, a bulldog of a detective, and brazen enough to outman every XY chromosome on this list.

-Cornelius Franklin, Highfell Grimoires by Langley Hyde. A scientists and sort-of conjurer in horrible circumstances who nevertheless has compassion enough to help those in even worse circumstances.

-Julia Wicker, The Magician King by Lev Grossman. A true female anti-heroine with terrific aspirations whose fearlessness and indomitability never failed to inspire.

-Christine, the Whyborne & Griffin series by Jordan L. Hawk. She. Is. Awesome. (Yes, I cheated.)

(For any show that aired a new season during this calendar year.) 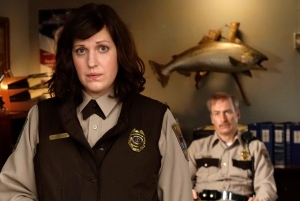 -Molly Solverson, Fargo. Because everyone underestimated her, but she never gave up.

-Felix Dawkins, Orphan Black. Yes, the clones, Tatiana Maslany, I know. I agree. But I adore Felix. He’s the one I’ll still watch for if it turns to shit.

-Alison Bailey, The Affair. Both versions of this character break my heart.

-Vanessa Ives, Penny Dreadful. She isn’t ‘the girl’ in a show full of showy male parts. She is the Queen who has every male character on his knees.

-Rustin Cohle, True Detective. Time may be a flat circle, but this guy is one well-rounded, poetic, devastating sumbitch.

-Brienne of Tarth, Game of Thrones. Biggest badass in the most badass fight scene of the year.

-Danny Pink, Doctor Who. Worst use of a great character. I don’t love Clara, but I love how he loved her.

-Barry Allen, The Flash and Arrow. See aforementioned Grant Gustin obsession. This is why.

-Alicia Florrick, The Good Wife. On a show full of colorful and complex characters, she will always be the most fascinating to watch. I actually find myself thinking, “Be more like Alicia Florrick.” That is a good thing.

(Not a great year for women in film. I want there to be more on this list. Blame Hollywood misogyny.)

-Dido Elizabeth Belle, Belle. Grace and poise in a world where everyone was against her.

-Peter “Star Lord” Quill, Gamora, Rocket Racoon, Groot, and Drax, Guardians of the Galaxy. Yes, all of them. Do I really have to explain?

-Gustave H., The Grand Budapest Hotel. The kind of rogue you wish was in your life.

-Mike, Birdman. A method asshole for the ages.

-Ivan Locke, Locke. Only character on screen for the entire length of the movie. Never, ever boring. Tom Hardy, you are a god.

A very happy New Year to you all! Here’s to even more diversity and better representation in 2015!