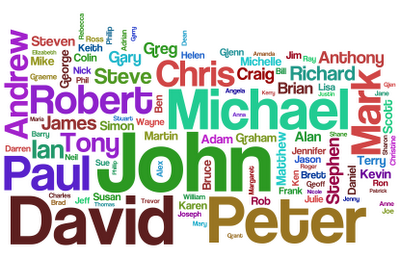 The naming of cats is a difficult matter

It isn’t just one of your holiday games

When I tell you a cat must have three different names

First of all is the name that the family use daily

Such as Peter, Augustus, Alonzo or James

Such as Victor or Jonathan, George or Bill Bailey

All of them sensible everyday names…

-T.S. Eliot, The Naming of Cats

It happens like clockwork. Every few weeks, one of my writer friends will bemoan the fact that they can’t think of a name for a particular character, that this is the part of writing that they hate the most, that inventing a person is easy but giving them the right moniker is mission: impossible.

At first, this surprised me. Why? Because I LOVE to name things. Not just characters or places or cars or stuffed animals, a favorite armchair or sex toy, but anything. I obsess over the names of my characters, doing hours of research until I find the exact right one. To me, a character doesn’t really exist until they have the right name.

I am what is called a name nerd. I have bought more baby naming books than I care to admit, and I never intend to have any children. But I’ve had an ever-changing list of what I would call my hypothetical children that will never exist since I was ten years old (current faves: Persephone and Lorcan). I fret and debate and fiddle with potential names far more than actual parents do over what to call the baby that is at that very moment gestating and will soon be a living, breathing person.

But I came to understand my fellow authors’ grief. When you think about it, unless you’re having a quiverful of J-named tots, most parents will only name one to four children in their lifetime. A successful author could potentially name hundreds of people, from their main protagonist to all the incidental people in a book to family members who get a one-time mention but never appear in a scene. And if you’re writing about a fictional place and/or fantasy world, the number of names rises exponentially. There’s a reason Tolkien invented two languages in order to name his characters with some consistency. When you are a creator of worlds, you’re responsible for the well-being—and the names—of the people and creatures that populate that world. But relief is in sight because…

Authors friends, I’m here to help. Nearly thirty years of name-nerding has taught me more than a few tricks, and I’m happy to share. This post is the first in a three-part series of tips and tricks for naming your characters (and places, and things, etc…). This first one centers on contemporary names, and the two that follow will be on historical names and fantasy names.

Before we dive in, I also want to offer my service as a character name consultant. Email me at selinakray@hotmail.ca if you like these tips and need some help/advice/inspiration. This kind of thing is like crack to me, so don’t be shy!

1. Think beyond Paul and Sarah. Please. For the love of all that’s literary. In the romance genre, there’s always the fear of being too flowery, too cutesy, too try. We’ve all read those books, where characters have crazy, improbable names that distract from who they are or just don’t fit. I write and read M/M, and a particular dislike of mine is all the macho-man names like Stone, Brock, Jock, or Rip. Soap opera names. These don’t always have to be a bad thing, though. They can be used ironically, or to tell you something about the character. No name is a bad name if it fits the character wearing it.

As a reaction to that, some authors go the complete opposite direction and give their characters the most simple name possible. You know the ones: Mark, Dave, Steve, John, Mary, Sarah, Catherine, Elizabeth. There was a point at which if I read another book with a character named Paul, I considered returning the book on principle.

We can do better, without cracking out the weird Y’s, extra consonants, and Gaelic spelling. There are hundreds of simple, classic names that are a little left of center—maybe a little old-fashioned, maybe too long out of use—that could fit your character. Oscar, Felix, Dario, Stellan, Bram, Lionel, Rufus, Arturo, Barney, Jerome, or Sabine, Clara, Simone, Nadine, Mira, Juniper, Faye, Lena, Carly. All easy to pronounce, all easy to read. Each with their own unique flavor.

A good baby name book, like my bible Beyond Jason and Jennifer, Madison and Montana, or website like Nameberry, will give you thousands of options that don’t get into Jerramy and Kaetelynn territory. So please, go explore the possibilities!

2. Law and Order is your friend. Once upon a time for work, I had to watch around 200 episodes of Law and Order over a period of maybe four months. What struck me at the time—other than, “Please, please don’t let me be assigned another episode of Law and Order”—is the variety of names that the writers of that show had to come up with over 20 seasons of 22 episodes per season. They couldn’t all be variations on John Smith.

But their pain is your treasure. The show is set in New York, the original melting pot of cultures and ethnicities, and all of these are represented in the names used on Law and Order and its various spinoffs. Need inspiration? Go to their IMDb page and scroll through the list of names. I guarantee you will find something offbeat but authentic.

Any favorite television show, film, or book can provide character name inspiration. Are you a fan of Judy Blume? Buffy the Vampire Slayer? The Godfather films? All great starting points.

This brings up a prickly issue in the character naming game, which is cultural background. Most of the names I’m going to suggest in this post are from a white North American perspective because I am a white North American and not qualified to speak about other traditions. But I hope we are all committed to writing diverse characters and, when doing so, using the naming traditions of that particular culture. All names are beautiful! So do your research, reach out to people within that particular culture, and get it right. We’ll get into this more in the historical post.

3. Balance is key. The person who inspired me to write this series of posts and my personal naming guru—though she prefers the moniker ‘name therapist’—is the wise and wonderful Duana Taha, who gives name advice in her bi-weekly column over on LaineyGossip.com (search for the name nerd tag in Lifestyle).

Duana, who has one of the loveliest and most unique names I’ve ever heard, is the ne plus ultra of name nerds. I just finished her book, The Name Therapist, which I suggest all authors pick up, and it is a goldmine of naming tips and theories.

One of the things I’ve learned from her over the years is that names need balance and flow. To achieve this: first, middle, and last names shouldn’t have the same number of syllables. The ideal would be any variation on a 1-2-3 balance, i.e. 3-1-2, 2-3-1, etc. Richard Brice Westinghouse. Francesca Ines Behar. Gideon Abel Dershowitz. Catriona Leigh Byrne.

She tends to come down against alliteration, again because of the cutesy-twee aspect. But that cutesy-tweeness might tell you something about that character or their parents, so try to avoid it, but don’t rule it out entirely. She counsels against too many names ending in A for girls—especially in both a first and middle name—and also having a first name end with the same vowel that a last name begins with.

Say the name out loud, listen to the flow. If you stutter or stumble, go back to the drawing board.

4. Avoid stereotypes. We’ve all read books with a cop named Jake or Mac (apologies to Josh Lanyon) or a plain girl named Jane. A doctor named Richard. A princess named Kate. These names take on lives of their own by being used over and over again in similar contexts, leading us to make associations with jobs or characteristics, even causing us to categorize certain names as ‘good’ or ‘bad’. Staying away from these stereotypes helps to avoid reinforcing them.

But names aren’t neutral, far from it. We each have our specific, personal experience of people with certain names that are either beloved or have bad associations. For instance, I love the name Astrid because of a dear friend, while childhood bullies have forever soured me to the names Louise and Kerri. A fun exercise might be to name a misbehaving or misunderstood character one of the names you dislike, or an annoying character a name that doesn’t have music in order to help shape their identity. But using a name you love might spell trouble for you as a writer. If you love the person behind the name too much, you might not have the right perspective on the character’s actions.

Whether a name ‘fits’ your character’s identity can help shape them in your mind and define for you some of the major challenges/traits/flaws they have as a person, so choose wisely.

5. Think generationally. Another thing Duana talks about in her excellent book is the popularity boom of Jennifer in the ’70s and ’80s, a phenomenon that is unlikely to be repeated. I lived through that era and knew my share of Jennifers (and Julies, since I live in Quebec). But nowadays, Jennifer is a mom name. So is Stephanie or Jessica or Pamela or Karen. Dad names are Kevin and Josh and Jason and Steve and Patrick.

Some names, like Michael, are classics that transcend generations, but most common names speak volumes about specific decades or eras. What do names like Ethel, Doris, Herman, and Bernard evoke? The 1920s and ’30s, when our grandparents—and for this generation, great-grandparents—had their heyday. Conversely, someone who’s in their teens/early 20s in 2016 is unlikely to have the name Judy or William. Don’t believe me? Go hang out at a playground.

A simple Google search can clue you in to era-appropriate names. But don’t be too reliant on those top-ten lists. One thing that never goes out of style? Originality. There are thousands of names that have no decade or era association at all. Yet another reason to research, research, research.

Or consult your friendly neighborhood name nerd. I hope this post has been helpful! Drop me a line in the comments and let me know your name obsessions and pet peeves.