“You’re not a real geek if you don’t read comic books.”

If I had a dollar for every time this sentiment, or something like it, has been spat at a female geek by some ignoramus, I could retire in style and have enough left to form a kick-ass, “let’s get more girls in STEM” charity. There’s nothing geeks love more than to accuse some newbie of not knowing the secret handshake (see: #Gamergate). So, I’m hear to say it, loud and proud: I am a geek, and I do not read comic books!

Except… now I kind of do. And it’s all because of the stellar, creator-driven output of Image Comics.

First, let’s backtrack a bit. It’s not that I’ve never, ever read any comic books in my life. I had a brief flirtation with Wonder Woman in the late ’80s. I remember a Twilight Zone-like horror comic that I picked up at random at the library and which scarred me for life (seriously, I remember every suffocating panel of that thing). A few years ago, I read an article on Alan Moore and decided to finally read Watchmen, which, if you haven’t read it, drop what you’re doing now and Go. Read. It. That book is the blueprint for everything that’s come before it and after, and better than whatever the next generation will dream up. I also somehow fell into Y: The Last Man, and didn’t come up for air until I had read every last one (Filmmakers: Jennifer Carpenter is still young enough to play Hero!). That is when I discovered the beautiful mind of Brian K. Vaughan.

Before the holidays this year, I was reading The Mary Sue’s geek gift guide when, lo and behold, they recommend a new comic series by Brian K. Vaughan called Saga. And that, friends, is when I fell down the rabbit hole.

Saga and many other awesome comic book titles are published not by the big two, Marvel and DC, but by the number three comic book publisher, Image Comics. But unlike the big two rivals that we never stop hearing about–especially now that their Greeks vs. Trojans-level war has bled into their own respective cinematic universes–Image gives their creators free reign to let their imaginations go wild. They also allow them to own the rights to their comics and characters, something Marvel and DC would never permit (understandably, since it would be insane to let a single comics writer own Batman or Captain America). Much like the great auteurs of the cinema, this gives these writer/artist pairings the leeway to create original, complex, and fantastical worlds, full of multi-faceted characters of every color, gender, sexual orientation, or creed under the sun–or, you know, the three moons of Endor.

(Calm down, I know Endor doesn’t have three moons. It sort of is a moon. Maybe. The cannon is unclear.)

Image titles have women who equal men in their power, ferocity, and flaws—like in ODY-C, a phantasmagorical re-writing of the Odyssey by gender-switching the characters. People of color who are regularly cover stars—like in the pop fantasia The Wicked + The Divine. Queer characters—like the many trans characters in the dystopia Trees. Female creators allowed to push things to the limit—like in Kelly Sue DeConnick’s new series set in a woman’s prison in outer space, Bitch Planet.

Take Saga, a space opera with imagination to spare and themes as profound as any play by Shakespeare. Specifically, it references Romeo & Juliet in its story of two lovers from warring civilizations who have found each other despite cultural differences and being force-fed propaganda about the other since birth. But Alana and Marko are only the beginning of the story, which spans across galaxies but always stays with the impromptu family at its heart. It has warrior mommies, TV-headed closeted alien princes with short fuses, a disembowelled ghost nanny, a lie-detector cat, a tree spaceship, and just about the ugliest-looking spider assassin woman your worst nightmares couldn’t dream up. Most of all, it’s the story of two houses, both alike in savagery, who have been fighting so long that they couldn’t stop even if they could see the end of the conflict. But it’s so much more, and artist Fiona Staples jam-packs each frame with such atmosphere it’s as if you’re dreaming her panels, not reading them. 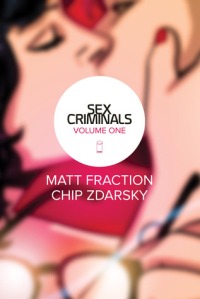 I also picked up Sex Criminals, a bawdy and hilarious title by their number two go-to guy, Matt Fraction, and artist Chip Zdarsky. The best way to describe it is as some kind of X-rated rom-com noir, with a female lead character who is in charge of her own sexuality and is not shamed for it. If anything, she’s actually more in control and self-aware than her male love interest (no, that is not one enormous typo). The premise is insane (and I won’t spoil it), the artistry is moody and sensual—but best of all, it’s hella funny.
Whether your jam is personal stories or fantastical allegories, space tragedies or pop culture philosophizing, I’m betting there’s something here to tickle your synapses. Diversity. Originality. Author-controlled creative works with no boundaries save the limits of imagination. These are the kinds of stories we’re always begging Hollywood for. Well, Hollywood better get in line.

So, what are you waiting for? Dive in!