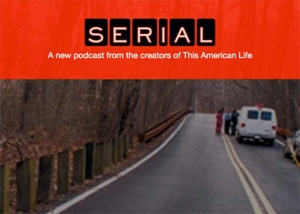 Before the onslaught of book promotion begins, I thought I would tell you savvy folks about my latest obsession: Serial, the podcast created by Sarah Koenig and the team behind This American Life. Serial is a weekly podcast that investigates the 15-year-old murder of high school student Hae Min Lee, which considers the question of whether her ex-boyfriend Adnan Syed really strangled her. Adnan was convicted of this crime and has been in prison ever since. His defense lawyer, however, was extremely sketchy, and was even convicted of misrepresenting her clients a few years later. In this, like most cases, there is enough wiggle room to leave space for a considerable gray area. That there is reasonable doubt is without question. Whether Adnan actually did it or not is another matter entirely.

When I first started listening to Serial, I thought it was fiction, an extremely well-produced radio play. This idea, that someone would marry old-fashioned radio with our newfound obsession with true crime, impressed me more than the first episode. (It’s a bit of a slow burn.) I also didn’t think that a reporter, even one in this age of cell-phone cams and Skyped business meetings, would have access to that many police recordings and trial videos. I found myself thinking things like, “Wow, they’ve made a real effort to find a multi-cultural cast,” as I listened.

Turns out I couldn’t have been more wrong. Koenig, who plays both host and chief investigator, has a casual style, but has she ever done her homework. Her and her team have tracked down recordings of police interrogations with the major suspects, interviewed countless supporting players, combed through cell phone records and evidence files, even gone so far as to try and re-create the route the killer used when he committed the crime. Not to mention that Adnan regularly calls her from prison for updates and to give firsthand testimony. Through it all, she remains wonderfully skeptical of both his guilt and his innocence. She is following the facts, wherever they may take her.

If this sounds like a highbrow version of shows like Dateline, 20/20, and 48hrs, it is, but in the best way possible. With this true-life story, the devil really is in the details. We, as humans, love procedure–the films of David Fincher and the books of Tom Clancy, to name just a few, are a testament to that–and there is something immensely satisfying, at least to me, in examining every aspect of this case for inconsistencies. On the last episode, Koenig said something like: “Forgive me, for a moment, for boring you with talk of cell phone records.” But at that point in the narrative, there is absolutely nothing to forgive. We are in it. We are hooked. Tell me about the cell phone records! I’m a beggar at the feast, waiting for a crumb from the Queen.

What makes this close examination of the details of the case all the more thrilling is Koenig’s nuanced readings of the facts. She begins episode one by reminding us how hard it is for us to remember something that happened a few days ago, let alone 15 years. So many of the witnesses she interviews express similar reservations about their own remarks. She is not afraid to let things remain vague or unproven. If anything, her overall point appears to be the fluidity of truth. Will we ever know, really know, if Adnan killed Hae?

The answer, of course, has to be ‘no’. To me, the most fascinating and challenging thing about Serial is that there might not be an endgame. When you read a murder-mystery tale, the author has everything planned out for you, down to the final twist, just like in those fictional radio plays of old. But no matter what Koenig’s conclusions about the case end up being–if she even feels like she can come to a solid conclusion–the truth, as they say, will stay out there. Only Adnan and Hae know for sure. The former is as unreliable a narrator as they come, and the latter is dead.

Serial not only forces us to reckon with uncertainty, it’s a tragedy that defies Aristotelian logic, embracing ambiguity, injustice, and the mysteries of life. I am riveted.

P.S.: So get your asses over to the site and listen! This kind of work deserves to be rewarded! 😉