Today I’m welcoming romance author Sara Dobie Bauer to talk about the first book in her new paranormal romance series, Escaping Exile. I’ve had a chance to read the book, and I can tell you, it introduces two smouldering characters in Andrew, the man in exile of the title, and Edmund, who shipwrecks on the same small, cannibal-infested island. But the larger world of Victorian era New Orleans provides a backdrop and a promise for future instalments. But Sara herself is here to tell you more…

SK: What inspired you to write Escaping Exile?

SDB: Oh, my gosh, I wish I knew! I’m sure it grew from some smutty fantasy of mine: gay vampire meets shipwrecked sailor … and so it goes. I very rarely know where stories come from. Often, I’m inspired my music or my many muses, which include Benedict Cumberbatch, Timothee Chalamet, and Cillian Murphy. I love beaches, too, so maybe I was on a beach and thought, “Hmm, this looks like a good place for sex and cannibals.” Who knows?

SK: Your protagonist Andrew fits very nicely into the beguiling anti-hero mold. You strike an expert balance in terms of his misdeeds and the softer side of his character. What challenges did you face writing him? Did you worry he might turn some people off?

SDB: Andrew wasn’t challenging to write once I figured him out. Sure, on the surface he’s a bloodthirsty, murdering monster, but I opted for the “save the cat” method: presenting a decisive moment when the protagonist does something nice. Despite his deviant history, Andrew saves Edmund. Over the course of Escaping Exile, he protects Edmund and eventually falls in love with him. Andrew overcomes his past to become a hero—not to everyone but to the man he loves.

That said, there is one flashback scene involving an innocent young prostitute in New Orleans that worried me a little. I mean, Andrew is bad… but I believe he earns his redemption and eventual hero status. It’s up to the reader to decide!

SK: What’s your vampire origin story? What was the thing that sparked your fascination with them?

SDB: Interview with the Vampire by Anne Rice. I read it in sixth grade—which, looking back, was maybe a bit early and also revved up my teenage sexuality to critical mass. Despite Louis being the protagonist, I fell in love with bad boy Lestat: a lifelong pattern that I am certain has annoyed my parents to no end. In my defense, I married one of the good guys… as far as you know. (Wink.)

SK: Escaping Exile is the first book in a series. Can you give us a sneak peek of future instalments? Will they follow Andrew and Edward or other characters?

SDB: The love story of Andrew and Edmund is the focal point of the entire trilogy, as they both have a lot of developing and changing to do. They are not exactly morally upstanding men. They both doubt themselves and carry a lot of darkness in their pasts and presents. Together, they hope to make a bright future, but they have to first survive Victorian New Orleans and eventually London, while conquering some serious monsters—literal and metaphorical.

SK: As a fun final question, I always ask authors to pick which of their characters, from any of their works, they would have a one-night stand with, a long-term relationship with, and HEA with. What are your choices?

ABOUT ESCAPING EXILE:
Andrew is a vampire from New Orleans, exiled to a tropical island in the 1800s as punishment for his human bloodlust. During a storm, a ship crashes off shore. After rescuing a sailor from the cannibals native to the land, Andrew becomes fascinated with his brilliant, beautiful new companion, Edmund.

Edmund is a British naturalist who has sailed the world seeking new species. Intrigued by creatures that might kill him, immortal Andrew is this scientist’s dream-but so is making his way back home. Edmund will fight to survive, even while wrapped in the arms of a monster.

As light touches and laughter turn to something much more passionate, the cannibals creep ever closer to Edmund. Can the ancient vampire keep his human alive long enough to escape exile and explore their newfound love, or will Andrew’s bloodlust seal his own doom? 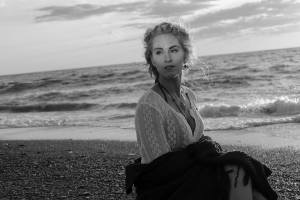 ABOUT THE AUTHOR:
Sara Dobie Bauer is a bestselling author, model, and mental health / LGBTQ advocate with a creative writing degree from Ohio University. Twice nominated for the Pushcart Prize, she lives with her hottie husband and two precious pups in Northeast Ohio, although she’d really like to live in a Tim Burton film. She is author of the paranormal rom-com Bite Somebody series, among other sexy things. Learn more at http://SaraDobieBauer.com.